Is the Col de Joux plan open or closed? The answer is further down. First I will set the scene.

The Tour de France is coming to the Haute Savoie in 2016. The Queen Stage is Stage 20, the penultimate stage but final day of racing. It’s from Megeve to Morzine  and scheduled for Saturday July 23rd . 146km long with about 3,500m of ascent. To add to the hype this stage has also been chosen as the Etape de Tour 2016 , this will be held on July 10th. 15,000 riders are signed up, it’s so popular the entries closed back in 2015! There are all sorts of previews of the route available on the web, this is one of the best.

The climbs are iconic, the Col des Aravis, Col de la Colombiere, Col de la Ramaz and Col de Joux Plane, because of this many cyclists are trying to ride the route prior to the event. The issue is that they have been covered in snow all winter and 3 important sections have major road works on them!

So are they open or closed? I’ll write this from my own knowledge, updated on May 19th/2016 ,I’ll add some pictures and other resources that might help at the end.

In order that they’ll be ridden.

Col de la Colombiere, closed to traffic but being ridden by many. No major issues.

Col de la Ramaz, officially closed but the summit is passable over about 300m of gravel. It needs tarmacking. This won’t put most cyclists off. Passable by car too. Though officially closed.

Descent from Praz de Lys to Taninges. Just before the Pont des Gets at 1100m altitude the road is closed to traffic thanks to a long term issue with a landslide. There is an official diversion via the Col de l’Encrenaz which works well for cyclists based in Morzine or Les Gets but it is a big detour for someone trying to ride the official route. UPDATE MAY 21st … In fact the issue (pictured below) is the fear of a spontaneous release on the landslip. There is a wall protecting the road and it is easy to pass. When this section is open the council erect traffic lights and place two full time “spotters” to keep an eye on things. Maintaining this presence out of season obviously costs too much – hence it is closed.

Col de Joux Plane, closed to traffic thanks to ongoing repairs to a landslip at 1640m altitude, just down from the Col du Ranfolly on the Morzine side. It is passable on the weekend by a bike but not recommended, crossing the hole with the bike on your shoulder is slippery and muddy too. I suspect a cyclist will be turned away when the building site is operational. The retaining wall by the landslip, no ongoing work and easy to pass. 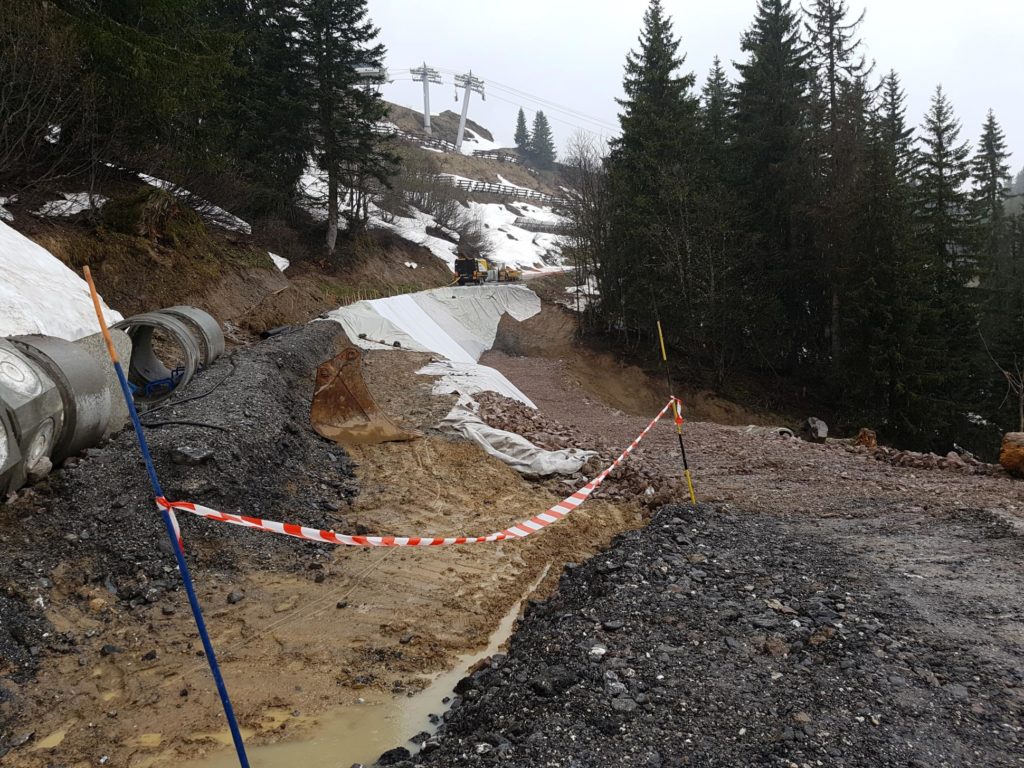 The hole in the Joux Plane road.

The hole on the Joux Plane has been repaired! Out of interest, the Joux Verte road from Linderets to Avoriaz is closed to traffic but passable by bike. Lower down the Joux Verte road towards Linderets.

Further resources are available on these links.

These are probably the best, though currently they differ from my first hand knowledge.

This is the official one.

and for the Haute Alpes